The hip joint can become very painful and annoying, walking or climbing the stairs can become very difficult actions to do every day. Several solutions can be proposed to the patient but at an advanced stage the radical solution which will allow the patient to find a normal daily life and the replacement of the joint by an artificial prosthesis.

Am I a good candidate for the hip prosthesis?

If you suffer from one or more of these symptoms, you are a good candidate for this procedure:

This package includes: the Surgery, anesthesia, use of the operating room, stay at the clinic, drugs, surgeon and anesthesiologist fees, Rehabilitation session with a physiotherapist, convalescence at the hotel and transfers (Airport / Clinic / Hotel).

Time of absence before returning to work : ou can return to work after one week. Do not exert yourself and keep moderate physical activity for 15 days.

Ask for a personalized quote with the opinion of the Surgeon. Click here. 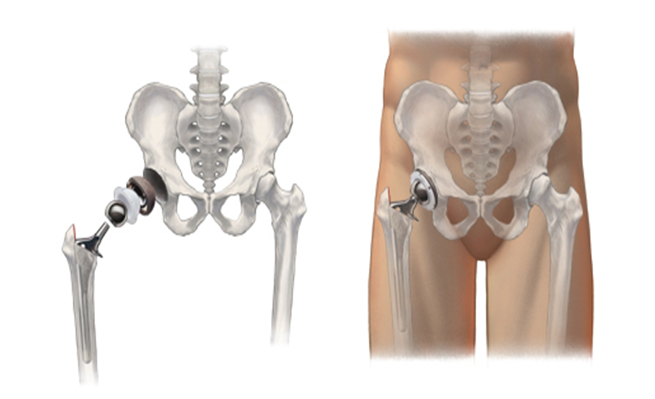 Before the hip prosthesis surgery:

What are the types of hip replacement ?

Prosthesis surgery for the anterior hip:

The prior hip prosthesis procedure is also known as the mini anterior approach for the hip prosthesis. It gives similar results to the traditional hip prosthesis procedure of replacing worn hip joints with prosthetic implants. The only difference in the prior procedure is the method of opening the body to reach the hip joint. This technique is a possible substitute for the posterior or usual approach.
While undergoing the operation of anterior hip prosthesis, the orthopedic surgeon makes a small incision of about 4 inches in front of the leg or part of the hip. With this approach, the surgeon can easily push the muscle instead of cutting it and reaching the hip joint. This method is considered the best because it causes fewer traumas and soft tissue damage, the risk of dislocation of new prosthetic implants is lower and it also allows for quick recovery.

This surgery is also known as semi-arthroplasty. In this procedure, the scientifically called “femoral head” ball of the worn or damaged joint is replaced by the prosthetic implant. During this procedure, the cavity, i.e., the acetabulum is not replaced. Partial hip prosthesis operations are usually performed when the patient has fractured their hips or has had a traumatic hip injury. This type of hip prosthesis surgery is not recommended for degenerative arthritis of the hip joint.

The minimally invasive hip prosthesis technique is a process whereby the orthopedic surgeon can implant the prosthetic components with one or two smaller incisions. An operation using such a technique means that there will be a very small scar, less postoperative pain, less blood loss during surgery and a shorter recovery time. For the operation, the surgeon may also need special equipments that may not be available everywhere.

Bilateral hip prosthesis surgery is a surgery where surgeons replace and reshape the hips at the same time due to excessive stiffness and arthritis pain. This type of surgery is not common because hip arthritis usually does not progress at the same rate. But from time to time, such situations can occur. If there is significant damage with severe pain due to arthritis in both hips, the patient may be advised to undergo a bilateral hip prosthesis operation.

After the hip prosthesis:

From the operating room, the patient leaves for the postoperative ward where his condition is monitored for approximately 24 hours. Throughout the patient’s postoperative course, an experienced physiotherapist assists the rehabilitation.
In one week, patients are so mobile and autonomous that they can be transferred to another workplace. Removal of sutures from the wound is recommended 12 – 14 days after the operation. Patients visit our Outpatient Clinic for regular exams 1, 3, 6, 12 months after surgery. Subsequently, they are regularly monitored at annual intervals.

Ask for a personalized quote with the opinion of the Surgeon. Click here.

Do you need a surgery ?

Get a free quote

A quote includes the diagnosis of a surgeon on your case and an estimate of the costs for an all inclusive stay.

MEDIKALISTA uses cookies to track visits to our website only. By continuing to use the site you are agreeing to our use of cookies.Ok